At an Annual Parish Meeting, Alma Saker gave a talk on her experiences at Court Lodge and the Fairbridge Society.

On Wednesday 3 March this year I was listening to Radio Kent and Andy Garland the presenter was asking about John Howard Mitchell House. As it happened I knew quite a lot about this house. It had been bought by a wealthy benefactor for the Fairbridge Society in memory of her son. We knew it and still know it as Court Lodge, the house next to the Church.
This is really about the lost children of the Empire – children who had emigrated through the auspices of various societies to Farm schools in Canada, Africa and Australia. A lot of these children, obviously now adults have come forward to tell their stories of slave labour, of lies and of ill treatment.

Kingsley Fairbridge the founder was born in 1885. In 1909 at the age of 24 he had an idea – a vision – to people the British colonies with children who stood a poor chance in the prevailing conditions in England and so help them – the children and the Empire. Such was his faith that he persuaded 50 fellow undergraduates of the need for this idea, so much so that they formed a committee of The Futherance of Child Emigration to the Colonies. Kingsley Fairbridge was instructed to carry this idea forward, to collect money , to find a way. His fellow undergraduates each promised 5 shillings old money = £12 plus!

In less than three years he and his new wife founded the first farm school in Western Australia at Pinjarra, a small village about 55 miles from Perth. His aims for underprivileged children were:

1. that children of all denominations were received into the society and the Society would provide for each one in the faith to which he/she belonged.

2. the happiness and wellbeing of the children were the first considerations of Fairbridge

3. Each child was given the opportunity of being trained for any occupation for which he or she was best fitted

4. There was a system of after- care which provided fro the well-being of all until the age of 21 and after that if required.

In fact, ninety –eight per cent of those sent to the Commonwealth made good. This report was written in 1951.

I joined Fairbridge during the summer of 1951 as assistant to the Matron, Mrs Reeves. Court Lodge was, and still is I am sure, a beautiful house. We worked hard to make it into a comfortable home – if a little stark. We made up beds – and I don’t just mean making them up with clean linen – I mean starting from scratch – they had been delivered in flat back form and we actually made the beds.

By late Summer of 1951 we were ready to receive the first party of children. They came in 1s and 2s and in one case a little family group of 3 children. By the middle of October we had 20 children plus 3 adults, who were, in fact, Australian, and were going to escort the children to Australia. Here, at John Howard Mitchell House (as Court Lodge was then called) the prime object of the reception centre was to let the children get to know each other, to learn to live together and to adapt to their surroundings. Most of them having come from life in a crowded town they had no idea what life in the country was like so Knockholt gave them an inkling of the countryside.

In the very early stages of the children arriving, Mrs Reeves and I did all the chores, but, thankfully she was soon able to employ a lady to cook and another to clean. We were also fortunate that some kind person donated an automatic washing machine – a Bendix no less! Of course there were some children who were homesick and needed extra TLC but my instructions were to mother them not smother them. Matron also made a couple of rooms available to parents who wished to visit their children before they sailed to Australia. Fairbridge children were NEVER told that they were orphans or unwanted as some authorities and societies had done.

That first party of children was given a Royal send off. The Duke and Duchess of Gloucester came on the 5 th November 1951 to officially open Court Lodge as John Howard Mitchell House and to talk to the children and have tea with them. A few days later the children sailed from Tilbury to Australia to embark on a totally new way of life. 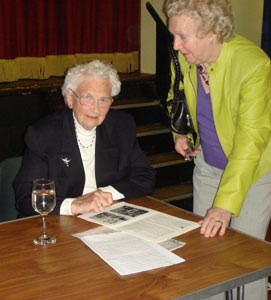